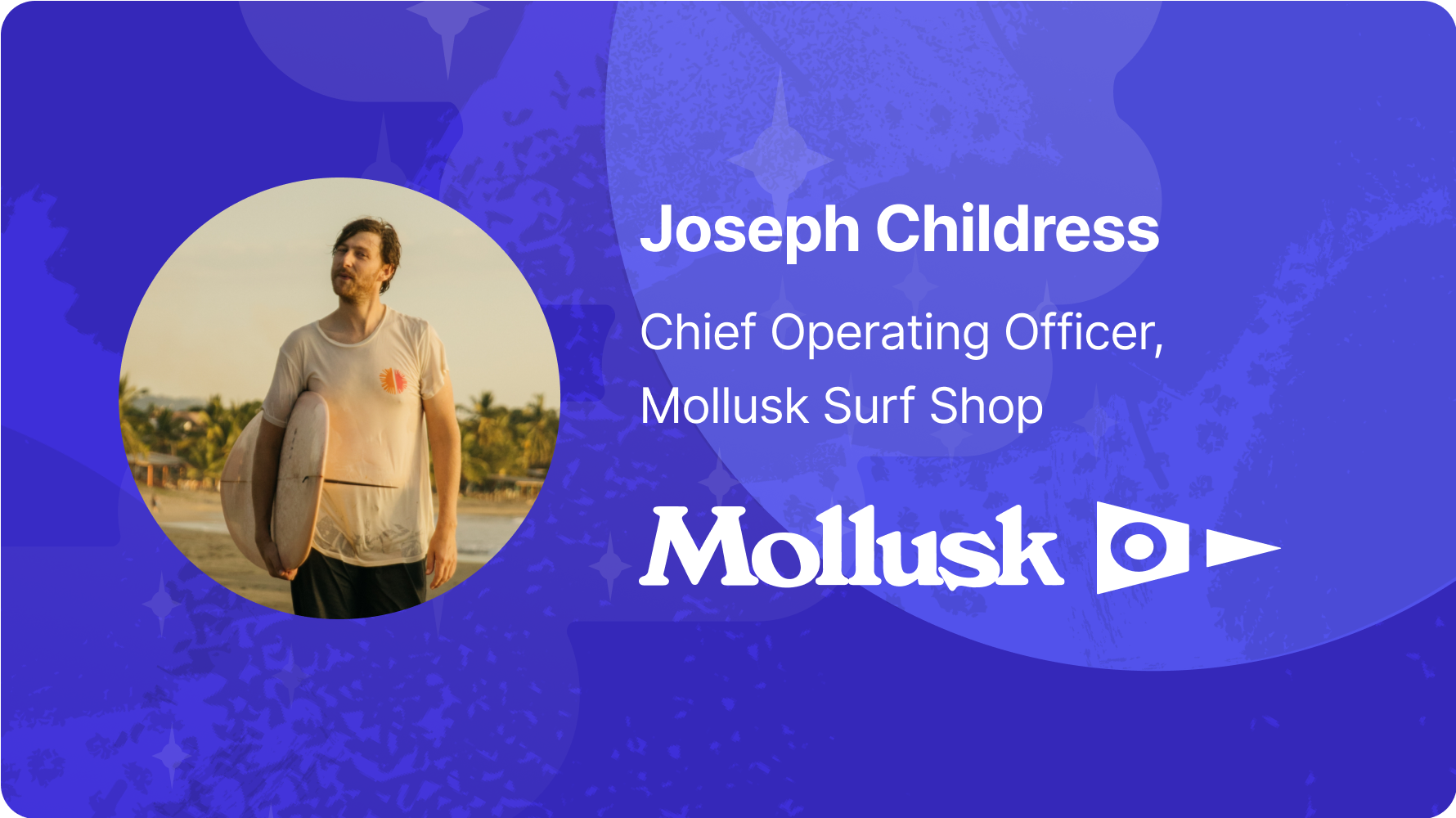 Joseph Childress, COO of Mollusk Surf Shop, has limited developer resources. He is constantly forced to prioritize the business problems to solve with his developer's limited bandwidth. Parabola helps him address the remaining business problems and has allowed him to deliver solutions to his team that he wouldn’t have been able to build and deliver before.

Joseph had a lot of ideas for how to leverage Parabola for their business, but he started with a problem that his store managers faced every week. Store managers at Mollusk’s three store locations were responsible for managing their own inventory and completing purchase orders for items that were running low in stock.

“This process was really manual. No tools were in place to make this easier or faster for them.”

The store managers were spending around three hours every week tracking their inventory on Google Sheets and filling out purchase orders.

“We do a fair bit of custom scripting as a business, but we only have so much capacity. While we knew this was a painful process for our store managers, we likely would never have written a script for it. We just don’t have that kind of bandwidth.”

“When I first landed in the Parabola builder, I was really surprised by how flexible it was and how many operations were available.”

Joseph’s Parabola flow uses the Google Sheets Import step to pull in data from Google Sheets files that track the optimal inventory for each of their stores. The flow also pulls in data from Vend (their POS and inventory management software) through our API Import and API Enrichment steps. The flow assesses their current inventory against their optimal levels and automatically creates new purchase orders inside Vend. Lastly, the flow emails Joseph a report of the brands that they placed additional orders from so he can stay in the loop.

Joseph's first flow now saves each of his store managers over two-and-a-half hours every week.

“This Parabola flow reduced what used to be a three-hour-per-week task down to a fifteen-minute-per-week task for our store managers. They’re all really happy with me.”

After successfully automating this purchase order workflow for low-inventory items, Joseph and the Mollusk Team have gone on to build several other flows on Parabola. Mollusk Surf Shop relies on Parabola for various reporting and lower-complexity automations across the different platforms they use including Shopify, Vend, and Google Drive.

“One of the most important parts of my job is figuring out how to solve a business problem. For complex problems that need a lot of customization, I'll write a custom script. For everything else, I now turn to Parabola first.”

One of the major benefits Joseph sees in Parabola is that it doesn’t take a technically-advanced person to be able to look at his Parabola flows and understand what it is doing.

“If I were to leave the company, I would be worried if the right team members would be in place to maintain our custom scripts. With Parabola, I don’t have to worry about that. Anyone can take it over, understand it, and keep it running.”

Now when they tell their friends and colleagues about Parabola, they explain Parabola as,

"A great automation platform for someone who isn't technical or doesn't have the capacity/time/personnel to write custom scripts."

Mollusk Surf Shop was established in 2005 to serve as an outlet for the craftspeople of the sport of surfing. Mollusk provides a showcase for the shapers, artists, filmmakers and various other people that make up surf culture. You can visit them in person at one of their three locations in San Francisco, Venice Beach, or Silver Lake or you can shop online with them here.

And get a 14-day trial of Parabola Premium.
Sign up